The Industrial Internet of Things (IIoT) is the driver of innovation in the production industry. The digitalisation promises essential advantages in the national and international competition. Especially the machining industry is a part of the key-technology that is leading towards an unmanned production. The foundation for Industry 4.0 is software platforms, smart machines, data and networking, that unite the virtual and the real world.

The sensor system spike® from pro-micron GmbH measures the forces and moments that effect the tool by transmitting the force directly to the spike®-sensors. The application area for the spike® reaches from machining processes like milling, drilling, grinding, turning and threading to joining-processes like FSW. With simultaneous measurements of all degrees of freedom of the tool and the Illustration with the patented spike®_polar the status of each cutting-edge can be monitored.

With the patented spike®_polar (bending moment resolution in a stationary coordinate system, derived of rotating holder-coordinate systems) for example vibrations, wear condition and cutting-edge breakage in milling processes can be detected and evaluated exactly. Unbalances of grinding wheels or mistakes during drilling processes can also be visualised with the spike®_polar.
This is how decrease of surface quality due to increased wear or the compliance of form and position tolerances can be controlled in-line – and also an automatic tool change can be initiated before quality problems appear. Short: «the spike®_polar presents complex correlations in processes easily and understandably. »

spike®_kpis are process or tool specific parameters, that are readable by machines and therefor displayed for automation. Thereby not only percental or absolute force-data is analysed. The spike®_polar can be evaluated in real time via algorithmic calculations and in addition orders for the machine operation can be generated. That is how spike®_polar-based spike®_kpis can for example initiate a wear-based tool change or a machine reaction when the tool breaks.

Artificial intelligence is a must-have in the universal process control and automation without an individual training-procedure. As one of the leading measurement-technique manufacturers in the area of machining, pro-micron does not only present visions, but already presents actual results.
The measured data of the spike® has a high signal difference and therefor provides an ideal data source for automated machine-learning via spike®_ai. Not the envelopes or limits are monitored, but process-based labels are trained for error detection and evaluated autonomously via neural networks by the software. With the process-specific labels and the possibility of integrating external data, the users only need a very short training phase for the system, but still receive a high reliability and operator convenience.

spike®_easyinline as a monitoring system

spike®_easyinline is the monitoring system in the spike® family and was conceived with machine-connection for the use in the automated serial production. This is how a 100% inline control is guaranteed. The monitoring system is not limited on new machines, but can also be implemented in already existing machines. The spike® sensors measure force- and moments-processes in real time and without cycle time loss and allows a comprehensive and especially a 100% production control. Costs omit for downstream measurements of components and interruptions of the production. With process-specific spike®_kpis and the innovative evaluation of spike®_polar the process control is safe and applicable on all machining processes and without any expert-knowledge of the machine operator. 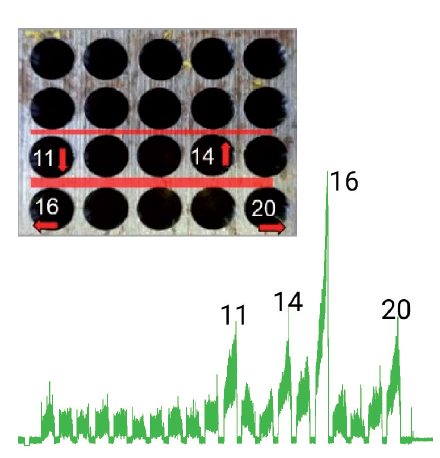 Offset drilling is a well-known phenomenon in the machining industry and the result of reducing the quality of the tool piece is not always detected straight away. With the machine-integrated process control with spike®_easyinline out-of-spec parts can be recognised and separated out in-line due to defective processes. That is how costs in the eventual value chain can be minimised. A offset drill does not have an impact on the operative torsional-moment and therefor is not detectable by controlling the spindle electricity. By measuring the bending moment with the spike®-systems, lateral offset drilling can be detected directly – as you can see in the drill hole 11, 14, 16 and 20. Stefan Wagner, leader of the process development at Robert Bosch GmbH describes the advantage of spike®_easyinline as following: «With spike® and its´ ability to also recognise smallest bending moments in serial processes […], we can ensure the high and also increasing quality requirements in the surface treatment, which our customers in the 24/7 production expect from us.»

Further advantages of a machine-integrated control with spike® are:

The connection to the machine control takes place via ProfiBus or Profi-Net. More possibilities to control appear due to digital and analogue electricity signals. Data in local or global networks can be exchanged and saved with an ethernet interface. The receiving unit is obstructed in combination with an IPC directly in the machine switch cabinet.

spike®_expertline as a diagnostic tool

The spike®_expertline is designed for the flexible and manual use from the case in order to optimise processes and tools. The diagnostic system is set up and ready-to-use in less than two minutes.
It enables for example to compare different machining tools easily and objectively. That is how you can find the ideal milling tool for a defined process. 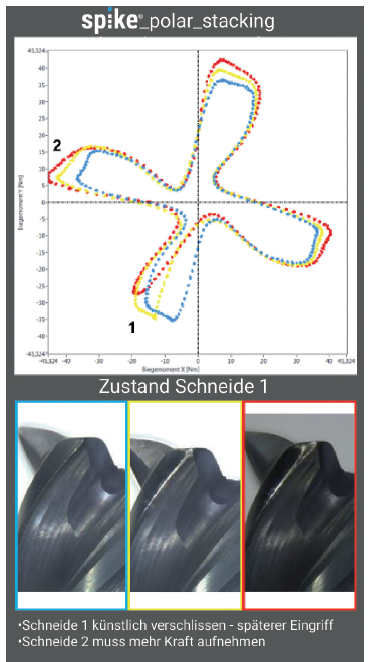 Also cooling lubricant or coatings can be compared and evaluated for each use. Next to research and development the diagnostic system spike®_expertline is also applicable for production, for example to detect ideal parameters for maximal tool lifetime at minimal process-times (which means highest productivity) or to identify and solve process-problems.
This makes spike®_expertline to a universal sensor system that covers every area in the machining industry - from the basis-research in laboratory conditions to the serial-attended measurement for analysing and optimising reasons. For a detailed evaluation of the measured data pro-micron offers a user-friendly and profound analysing software with diverse functions. This is how process data can be analysed and evaluated offline.
Software features like the spike®_trigger enable long-term diagnoses (also serial-attended diagnoses without machine-connection), in order to detect the potential of adapting parameters or adding value with new coatings or tool-geometries. The receiving unit is positioned outside of the machine and connected to a laptop. First alarm messages can be applied here.

spike®_assist as an assistance system for the machine operator

The assistance system was developed for the production of small and middle-sized batch sizes and supports the machine operator. As a visual process-support spike®_assist gives the operator at the machine insights about the process status, which enables feedback about the relative load of the tool and the machine in percent. The software of the assistance tools also offers the added value of the spike®_polar. Additionally, the percentual load on bending moments and torsion of the holder is depicted. An indirect wear detection is possible via drag indicators. The machine operator receives the additionally needed information via a user-friendly and compact visualisation on a tablet or a touch-PC, in order to control the production with the usual spike® performance.
Push-messages with adjustable warning signals can be sent to the spike®_app, when critical data is reached. With the spike®_app you can also receive a status report of the particular spike®_assist-system. This enables the machine operator to keep an overview of all machines also in unmanned productions – even from home. The newest solution of the product line exists out of the spike®_assist holder, a tablet/HMI-panel for visualisation, included the needed software and the receiving unit spike®_connect_assist. The whole system can be set up in less than two minutes and can be connected to the spike®_app with a few clicks.

With the background of skilled worker shortage, the switch to digital solutions in the machining industry is essential. As a majority of the producing industry still speaks about the feasibility of an unmanned production, pro-micron offers the solution for the digital change in the machining industry with the spike®-systems. All companies in the machining industry are trying to produce as unmanned as possible, optimise processes and increase tool lifetimes. These companies have to invest intelligently, in order to reduce costs and stay competitive. With a holistic, networked use of the spike®_systems, starting with the supporting tool for machine operators with spike®_assist, continuing with the serial-attended process optimisation with spike®_expertline and finishing with the process automation with spike®_easyinline, pro-micron does not just offer a product line, but actually an investment into the future - because pro-micron develops technologies of tomorrow - today.